1. January 12, 2021 He woke up earlier than usual and looked out the window at the grey sky, as the streetlight gave a sparkle to the gentle falling snow. His dog, Ginger, barked, as he stumbled into his boots and coat. Once outside their footprints were the first on the crunchy snow-covered sidewalk. The air was cold and hushed. The wind brushed his cheeks as the breath beneath his mask fogged his glasses. Down the block, he could barely make out the vague shape of another, but could not tell if it was approaching or leaving. Ginger stopped dead in his tracks, held nose to the wind and sniffed, the fur on his back bristled, his tail stiffened.

The stranger disappeared into the grey, Ginger barked, so they continued to walk in the same direction, as they did every day, two or three times a day, marking off the familiar trees, fence posts and fire hydrants. Still, no one else was on the street, and the snow was falling faster now, portending what could be the first big storm of the season. Ginger picked up the pace, barked, and relished the weather. By the end of the day, not everyone would be so happy. 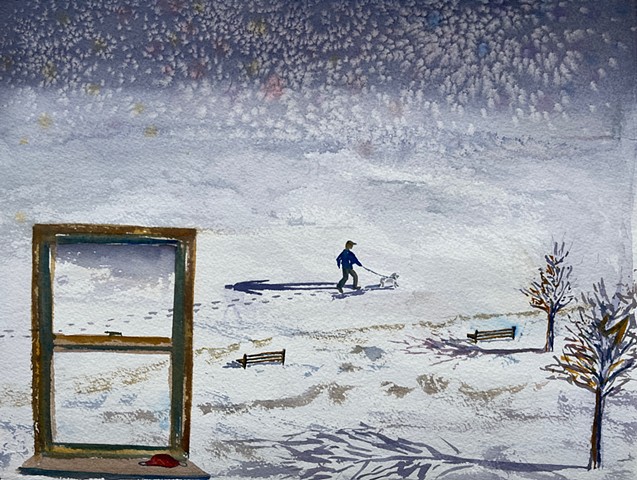