2. January 29, 2021 She slept in, and thought she would awake to the aroma of fresh coffee and a cold nose of a dog sniffing under the covers. It was only 8:00, yet Marcos and Ginger were not back from their morning walk. She turned on the radio to hear that this was a big storm, and would continue through most of the day. Looking out the window, she could barely see the street lamp down the block. The streets were blanketed with snow, as of yet, no one had ventured to make it down the street. This was a classic 'snow day'. No one would go to work, kids would not go to school, and instead would be out, with sleds in tow, making snowmen, castles and angels. She recalled those days, coming home in the afternoon, soaking wet and freezing cold. Mom would be making grilled cheese sandwiches and hot chocolate for her and the neighborhood kids.

But not today. One option was to crawl back under the covers and wait for the boys to come home. The other was to dress, brew some coffee, fry some bacon, and scramble a few eggs to start the day. She crawled back into bed, pulling the covers up high over her shoulders, and thought of her childhood, her mother, the small farm, and the small school she attended. It all seemed so far away, part of a dream. After sleeping for almost another hour, she was suddenly awaken by the cold draft that came through the open door, the bark of the dog, looking for a treat, and her boyfriend, screaming that there was something going on in the neighborhood and he could not put the pieces together. She was confused, irritated and then thought she should have been making breakfast. Marcos needed to settle down. They were not going back out until the snow stopped, and only then for an afternoon romp in the snow with the dog. This was going to be a fun day!

Without providing any details, Marcos insisted that they go back out to look for the missing character he saw down the street. He could not describe the person, but was sure something was amiss. By now, the snow had covered any footprints. He just kept repeating that something was wrong, someone was in danger, and that the police should not get involved. He was certain that if he let Ginger off the leash, he could track down the stranger. Maybe then they could offer some help. Sarah was not amused. The last thing she wanted to do this morning, on her snow-day off from work at the hospital, was to go out in a snowstorm to track down a homeless guy. So instead, she gave Marcos a hug and a kiss. 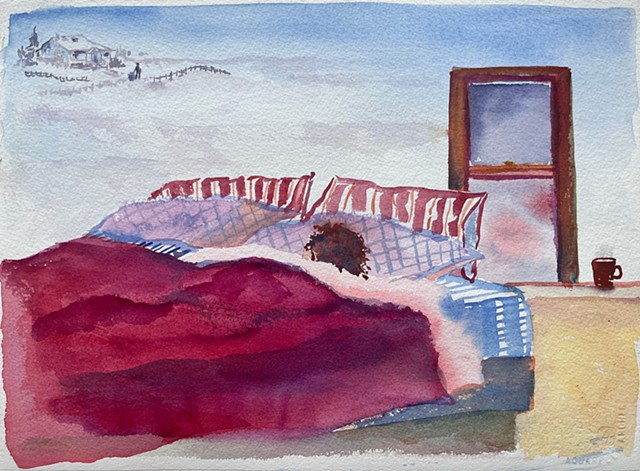