4. April 20, 2021 Sarah got up early the next day, knowing that it would take some extra time to get to the hospital, and she anticipated having to work a double shift if some people had trouble getting through the snow. She packed some extra clothes, a sandwich, and candy bar into her backpack. Marcos was still asleep, so she kissed him goodbye and left a note that she would call him in the afternoon. Ginger sat in front of the door, making guttural canine noises that sounded almost like words. Did he need to go out; did he want her to stay? She bundled up with a hat, scarf and gloves, nudged him out of the doorway and headed out. It was two blocks to the bus stop, and a 20 minute trip to the hospital. Just enough time to relive the events of yesterday, and trying to anticipate how the day would unfold. Too many patients, not enough staff, sneezing, coughing, hacking, and occasional cries of pain. Never a dull moment in the emergency room of the County Hospital.

Marcos got up shortly after she left and took Ginger out for a long walk. He avoided the woods, knowing that Ginger would want to go back. They walked through the neighborhood, waving to the few people who were trying to dig out of the snow. When he got back to their front door, Ginger pulled on the leash and lunged towards the curb with his tail up and his nose pointed forward. There Marcos saw a small area of trampled snow, a cigarette butt still smoldering, and a hack of blood in the snow. "Who is this guy?" he muttered as he pulled back on the leash. He looked around but saw no other trace. He went inside, took off his boots, and decided to lock the door. He contemplated calling Sarah, but did not want to upset her, and thought about calling the police, but what did he have to report; hacking and littering? He considered going back into the woods to confront this mysterious stranger, but decide he should not do that alone. He had work to do before noon, so he sat at his makeshift desk and began opening emails from the previous day.

The hospital was a madhouse. Too many patients, not enough staff, and so much to catch up from the previous day. By 1:00pm things started to settle down, and Sara could take a short break to collect her thoughts for the afternoon. She considered calling Marcos, but did not want to interrupt his work. Then she noticed the records file, and thought of the bearded old man. It only took her a minute to find his file, including the discharge instructions. His name was Roger Kiley, his lungs were in bad shape, his feet almost frost bitten, and he refused further treatment. There was a referral to a social service agency across town, and she wondered if he would have gone there for assistance. Then she looked a little further. He claimed to be from Millfield, Ohio. That was not too far from where she grew up. He may have been a coal miner, which could explain his current condition. Coal dust was hard on their lungs, and when the mines closed, there was no other work in the area. Sarah wondered what he was doing here, just outside of Philadelphia? A little voice was telling her to should dig a little deeper. There was nothing else in the file, and two new patients just arrived on the floor. Without any relief on the schedule, it looked like she might be here until midnight.

Marcos was working on a technical report for a software company downtown. He was revising the final section when Sarah called. It was almost 6:00pm. He was hoping that she was on her way home, because he was about to start making dinner. She sounded tired, "Marcos, I won't get off until midnight, could you come pick me up?" He relied quickly "Of course!" Then she said that they needed to talk about the homeless guy because she dug up some more information. He wanted to tell her what he saw in front of their house, but decided that might make her worry. The said their loving good-byes, and Marcos decide to take Ginger out for another romp in the snow. He would avoid the woods.

After a dog walk and leftovers for dinner, Marcos fell asleep. The alarm went off at 11:30pm, so he rolled out of bed to pick up Sarah. The driveway and roads were clear, and there was no traffic at this time of night. The round trip was just 15 minutes, but Sara fell asleep on the way home. They were both too tired to speak. Any serious conversation would have to wait until morning. 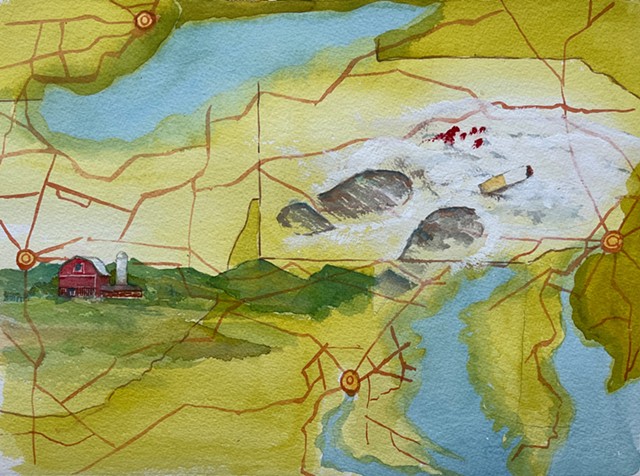