5. April 28, 2022 Several months had passed since the sick, bearded man came into their lives. Ginger occasionally ran into the woods, but there was no trace of his camp. Marcos was still certain that he remained in the area, and claimed to see his shadow on their early morning walks. Sarah thought he was just trying to spook her with a scary story. It was getting old.

The chaos at the hospital has subsided, although there are we still several cases a month of people with a gut wrenching cough that seems resistant to antibiotics. One day last week, the bearded man was back in the hospital, this time much sicker than before. He was not on Sarah’s floor, but in a wing of the hospital for terminally ill patients. She snuck up to see him when she had time. He was always asleep, or maybe even unconscious. The nurses tending to him said they were trying several medications, waiting for a positive response. Today, she pulled back the white curtain to get a closer look. There on the chair was the brown leather bag.

She knew better than to open it, but could not resist. She looked up and down the hall and could not see anyone. She did hear voices, but they were coming from a room down the hall. She would have to act quickly. As she pulled back the zipper, a foul odor of old, dirty laundry hit her nostrils. She gasped. Quickly she found a rubber glove on the bedside table and dug into the bag, not knowing what she might find. Her hand felt a small book. well worn, damp and wrinkled, she pulled it out, then heard laughter from down the hall. Her heart quickened as she fumbled to close the zipper. “Damn” she said quietly, and the old man responded with a loud, hacking groan. Then his weary eyes opened wide, a frightened shock came over his face, as he gasped his final breath. The heart monitor flat-lined.

Sarah quickly backed out of the room with the book in her pocket. She slipped into a supply closet as the floor nurses scrambled into his room. When the coast was clear she scrambled down the staircase, hoping the little black book could provide some answers. She would not open it until she was home with Marcos and Ginger later this evening. 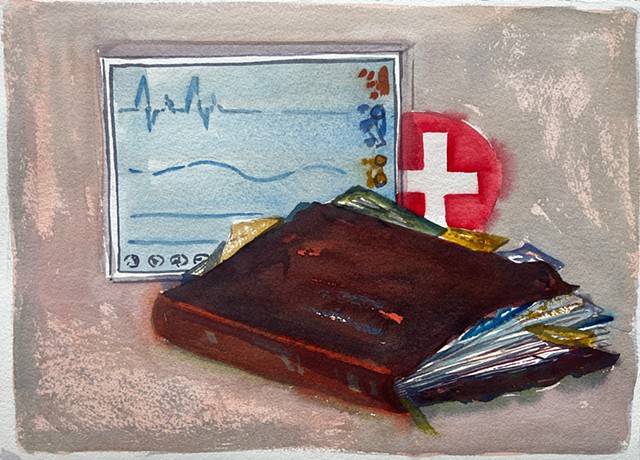