6. May 2, 2022 Marcos waited impatiently for Sarah to get home. He and Ginger had taken a long walk that afternoon. He romped around in the woods and met a new puppy in the neighborhood. From the dogs point of view, life was good. For Sarah and Marcos, the story would only get more interesting.

Sara had called before she left the hospital and said the old man was gone. He could tell from her voice that she had more to say. The evening turned cool. The sheer curtains billowed as the gentle breeze came through the open windows. He turned on all the lights and tuned the radio to a sappy soft rock station. He was trying to create a comfortable atmosphere. There was not much food in the house, but he could make grilled cheese sandwiches for dinner. There were a few beers in the refrigerator too.

Sarah came quietly through the door just after 7:00 pm. Marcos jumped up to give her a kiss, Ginger barely lifted his head off the floor. “Would you like a grill cheese sandwich?’ he asked. “No”, I have to show you something. They sat side by side on the couch, and she started to recreate the horrifying experience. As she spoke, every word was charged with emotions. Marcos did not try to interrupt, instead, he just let her narrative flow. When she got to the end, she pulled the black book from her pocket and handed it to him. he held it gently, “Did you look?” “Not yet” she said. “Do you want me to?”

Marcos flipped through the pages quickly. In addition to names and phone numbers, there were bus tickets, business cards, and other odd scraps of paper. Sarah took a closer look. She wanted to find his name, but there was no clear identification. Many of the addresses were from the small Ohio towns around Millfield. Place names she could hardly remember, of towns that may no longer exist. One by one the names had been crossed off, as if he was keeping track of their existence. She got to the end and tossed it to the coffee table. “Nothin’” she said, “maybe now I will have a beer.”

Just then, a chilling gust of wind came through the window. Ginger lifted his nose to the air and let out a protective growl, as if he sensed a stranger in the room. The little black book flipped gently, and a small card, torn in half fell to the floor. Marcos picked it up and turned it over. He froze, and could not read it aloud. Written in shaky old man penmanship, he mouthed the words: “find Sarah.” 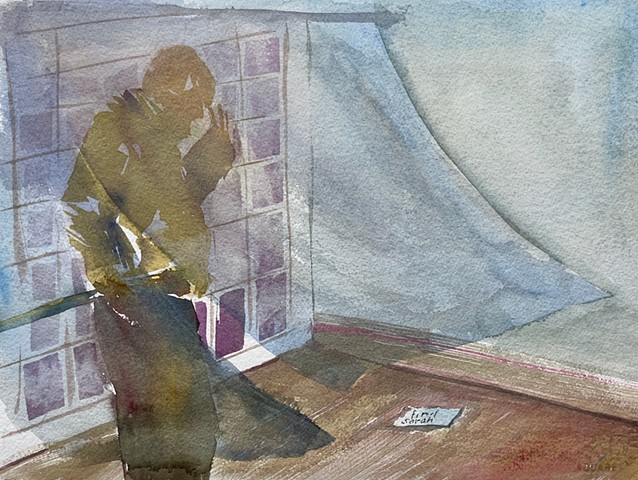